My local rivers have been constantly changing all winter like most others around the country, with lots of flood water causing them to colour up. Although I've been getting the odd fish in these conditions it's far from ideal but as the rivers fine down they are at their best!  And after the most recent surge of floodwater now starting to settle down it was time to get down there. 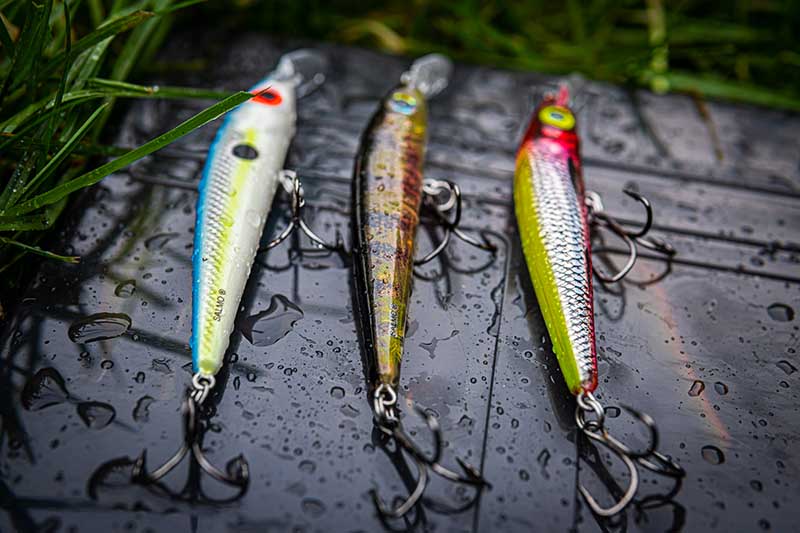 The Rattlin Sting features an integrated long cast system, so even with its 2/5 oz. weight, lengthy casts are no problem.

So with conditions looking good and a half day at work I nipped down the river in the afternoon. I was greeted by a lovely clear river with a nice tinge of green to it, perfect! As the temperatures were still low with ice on some areas of the river I went straight in with some small jigs. A few casts later and something didn't feel right. Everything looked good and I knew the fish weren't far away.

Making some dramatic changes to your approach can really pay off.

So out came the Salmo box and the Rattlin’ Sting 9cm in the lovely Sexy Shad pattern. This twitch bait has a nice erratic action with a very slow sink rate, meaning you can work it relatively slowly with pauses or quite fast depending on the retrieve required. When using lures with trebles on I will always use a wire trace as the pike also love these small hard lures.

First cast with the Rattlin' Sting and a couple of twitches later I was hooked up with something big. In my head I thought it was a pike but as it came closer I got a glimpse of her beautiful green flank and deep red fins, then seconds later she spat the lure! I was gutted, these chances don't come around very often.

The internal rattle chamber calls the predators in with exceptional efficiency.

I quickly got the lure back out and started the retrieve hoping she was still hanging around. As the lure came into view I couldn't believe my eyes as there were four big perch following it! It was like they were all swimming in formation ready to attack and every time I paused the lure they broke formation and dropped in the water a little. When all of a sudden one came out of nowhere and just nipped the back of the lure. A strong fight at my feet with only the back treble in the corner of its mouth ended with this stunning fish safely in the net.

What a difference a change of lure makes!

At this point I was shaking and just simply amazed! I quickly unhooked it and got some photos done constantly thinking about the rest of the fish that followed the lure in. A few more casts and I had fish following the twitchbait again. Interestingly I never felt a bite but observed them just nipping the back of the lure. After hooking and losing a couple I managed one more perch a little smaller than the first. But although they were obviously attracted to the Rattlin' Sting, they seemed a little wary.

The Minnow is a classic Salmo lure that has stood the test of time!

I then changed to the 7cm Salmo Minnow in holographic bleak which is a bit smaller but has a similar profile. And again the perch were all over it but this time they were a little more confident. I managed another two good size fish before the shoal disappeared. Searching the surrounding water resulted in no more fish but what a little session that was. I believe carrying a wide selection of lures including hard baits is a must. And even in freezing conditions don't be afraid of trying hard baits. Salmo have such a large range of lures that no matter the depth or size of fish you are after there will be something in the range for you. Tight lines and good luck!

Hard lures are not to be ignored even in the winter.