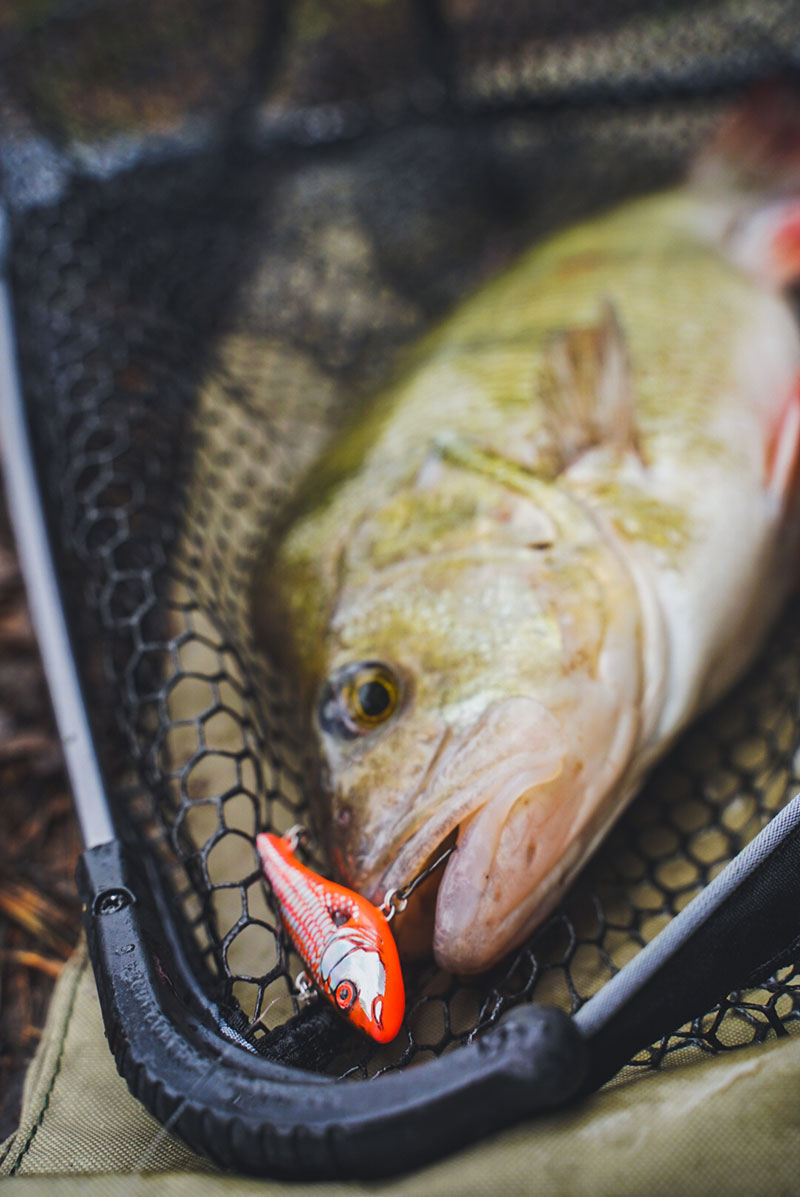 Think of commercial fisheries and you automatically think of carp. That’s only natural, this fish has been responsible for creating fisheries up and down the country. But this species is only half the story for these plentiful venues.

To spice things up in these commercial venues, they are also usually stocked with numerous other species too. From roach and rudd, to tench, bream and, of course, the bold and beautiful perch – a predator that has become the nation’s new favourite fish. And this is great news for us guys.

On most commercials perch are largely ignored, and as we recently found out during a trip out with Fox Rage and Salmo angler Samim Abbas, this can mean big perch that have never been troubled - until now…. 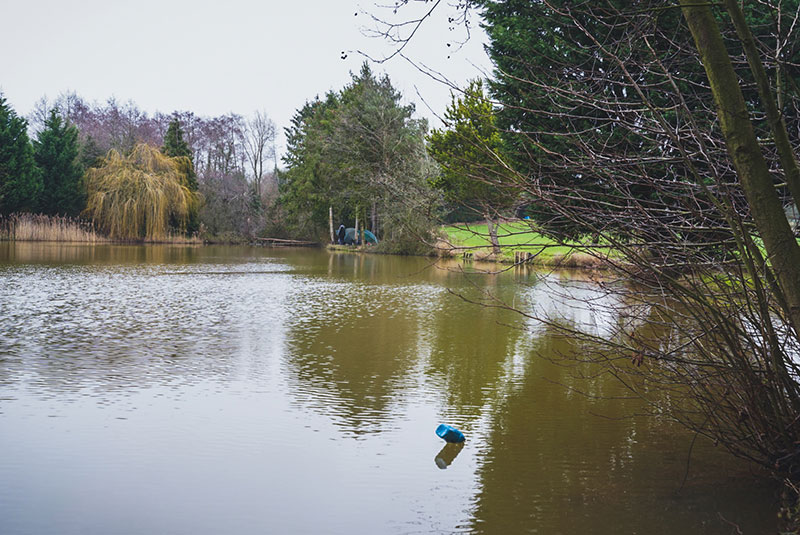 Look for features, including the margin at your feet

Our man Samim was given the task of catching perch from a commercial fishery using only Salmo lures, and on a freezing cold and rather damp morning in January, he set off to the Shropshire Countryside to take on the challenge.

“This is going to be interesting”, said Samim. “I’m just walking around looking at likely swims, but my fingers are already numb and I’m ankle deep in mud.” We didn’t want to make this too easy for him!

Commercials can be lacking in obvious features, but taking the time to do a little research and asking a few questions is always a great idea.

Here are a few tips from Samim to help you with where to start looking for perch on a commercial fishery:

Samim’s task is to use Salmo lures, but he’s decided to go a step further and not use perhaps the most popular Salmo lure of all - the mighty Salmo Hornet. “The Hornet has an excellent reputation”, he explains, “but I think it gets enough publicity. I’m going to use lures that are equally as attractive as the Hornet but perhaps less well known”.

He starts by using a Salmo Zipper 4.5cm in SBO (Silver Blue Orange) colour. This quirky little lure is actually classed as a vertical Jerkbait, so you’d think it would be more at home being dangled through a hole cut in the ice or off the edge of a boat - but it couldn’t be more at home being cast on a commercial fishery. 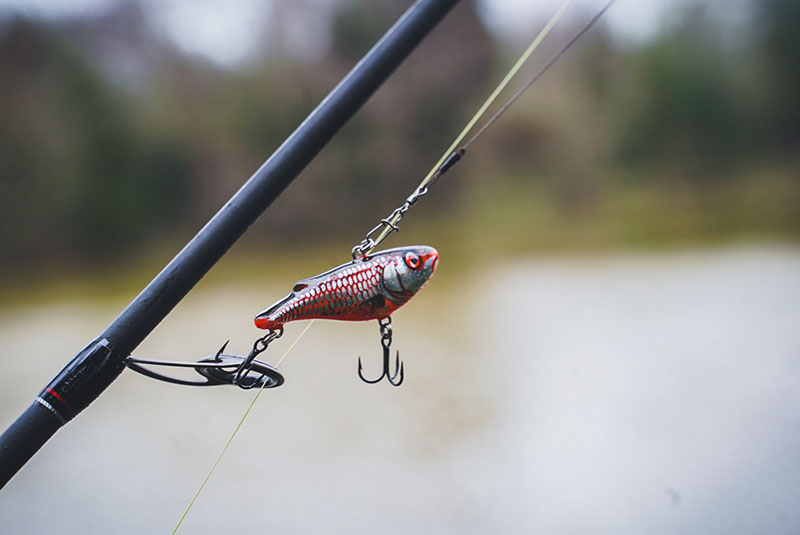 “I love the action of this lure. It's perfect for close in work, literally a rod length out. You don’t even need to cast it. Just use it as intended and vertically jig it up and down slowly or quickly depending on how the fish are feeding, and it will shake and dart about like an injured or fleeing fish” Samim tells us. “This lure is fitted with internal rattles, so besides being a perfect snack size for a hungry perch, it's a noisy little unit and will be great when the visibility is low in the water like today”. 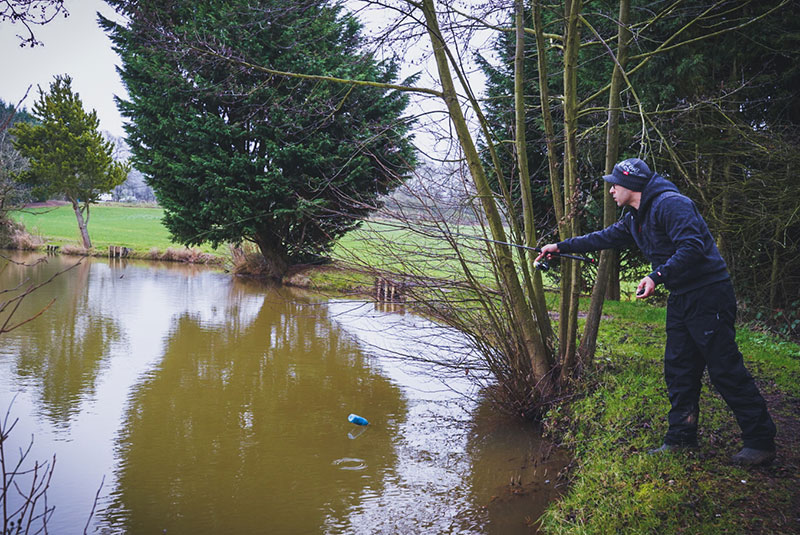 Note the marker for the crayfish pot - big attraction for perch

Samim spends a the first few hours working the lure close to the margins a rod length out, and occasionally casts it a little further under trees and along drop offs. He then notices markers that indicate the presence of a crayfish trap in the water and decides to fish around it.

“I thought I’d hit a snag” he shouts, “but it's moving!” Samim’s Prism Predator Spin Rod looks like it’s got a healthy bend in it and the fish is even taking drag out of his Prism 1000 Reel. Spotting the crayfish trap certainly paid off for him, as it seems to have attracted his first perch of the day weighing in at an impressive 2lb 6oz. A good start on an ice-cold and wet winter’s day. 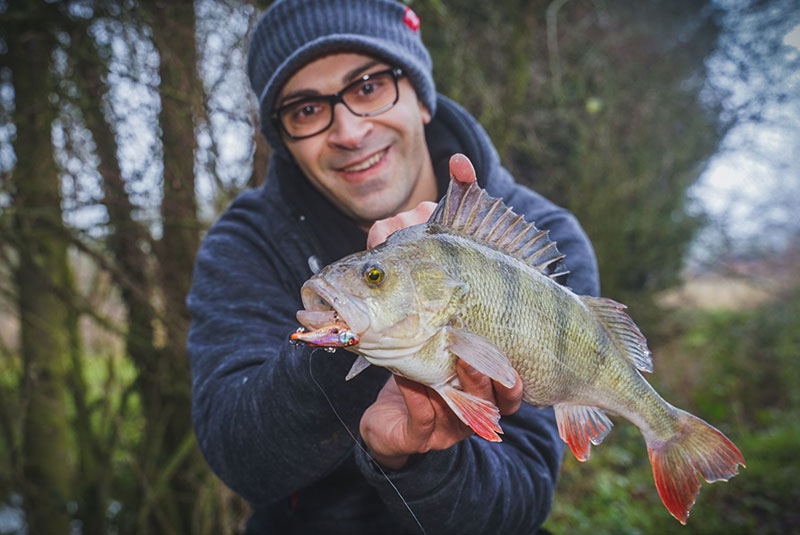 A stunning 2lb plus perch on the zipper

A couple of hours later and Samim is still sticking to the Salmo Zipper but there are no more bites. Time for a change – and one with a lip. “I’m now going to give the Sparky Shad a try,” he tells us as he snips off the Zipper directly tied to a foot long Drop N’ Jig Fluorocarbon leader in exchange for this unique looking lure.

The Sparky Shad has an unusual looking side profile and an unmatched movement that makes it truly unique. It’s special weight distribution creates a highly-attractive combination of side wiggles and wide tail swings. The slower you retrieve it, the wider the swings and more exaggerated the action. On a faster retrieve, the shakes become far more frequent with decreased swings, creating more disturbance in the water. 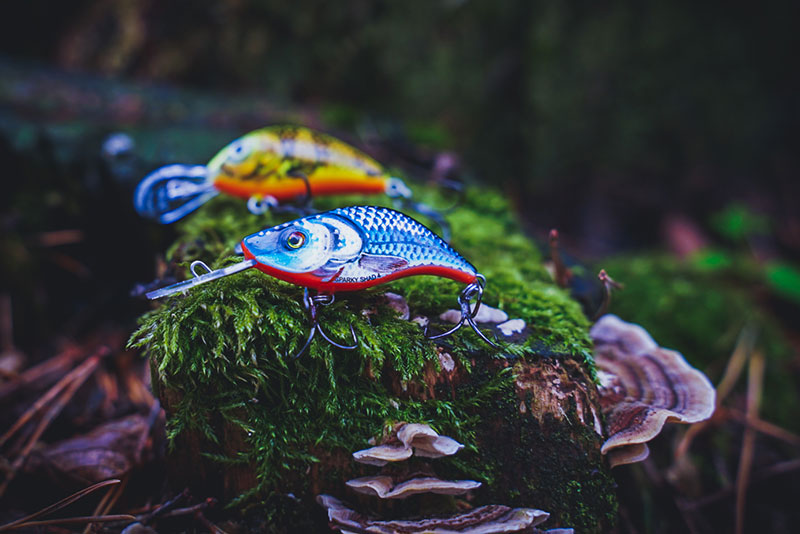 A change to the massive vibration of the Sparky Shad

Moving to a sheltered area with overhanging trees and bushes where the water is much calmer, Samim begins casting along the near margin, letting the lure naturally sink and varying the retrieve with every cast. Sometimes a straight retrieve, sometimes pausing and jerking the rod to create more erratic movements in the lure - and always aiming to vary the depth by letting the lure sink a bit more or working it aggressively so get it deeper until he finds the depth the fish are feeding at.

“I’m in again,” shouts Samim with a look of relief. “In this cold weather, you have to rely on the fish to keep you warm!” After a spirited scrap, a perch of 1lb 7oz is slipped into the Fox Rage Warrior Rubber Mesh net. 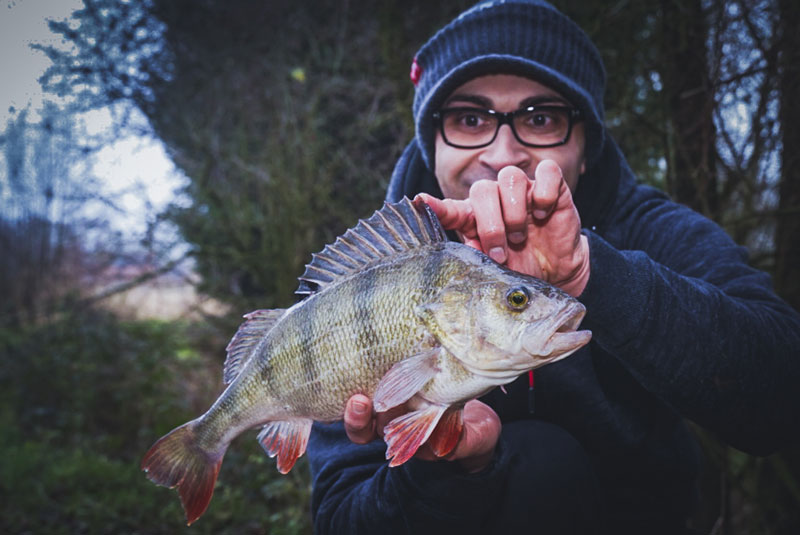 The Sparky Shad produced the goods as well

Keeping on casting the Sparky Shad, Samim lands a couple more fish to around the 1lb mark. “I guess that’s mission complete,” he smiles. “It’s amazing how your confidence grows in just one session with these lures. I must admit, most of my lure fishing is done with soft plastics, I guess it’s just the fashion now-a-days. But this session has definitely showed me that hard lures still hold their own; and they’re such a joy to use.” 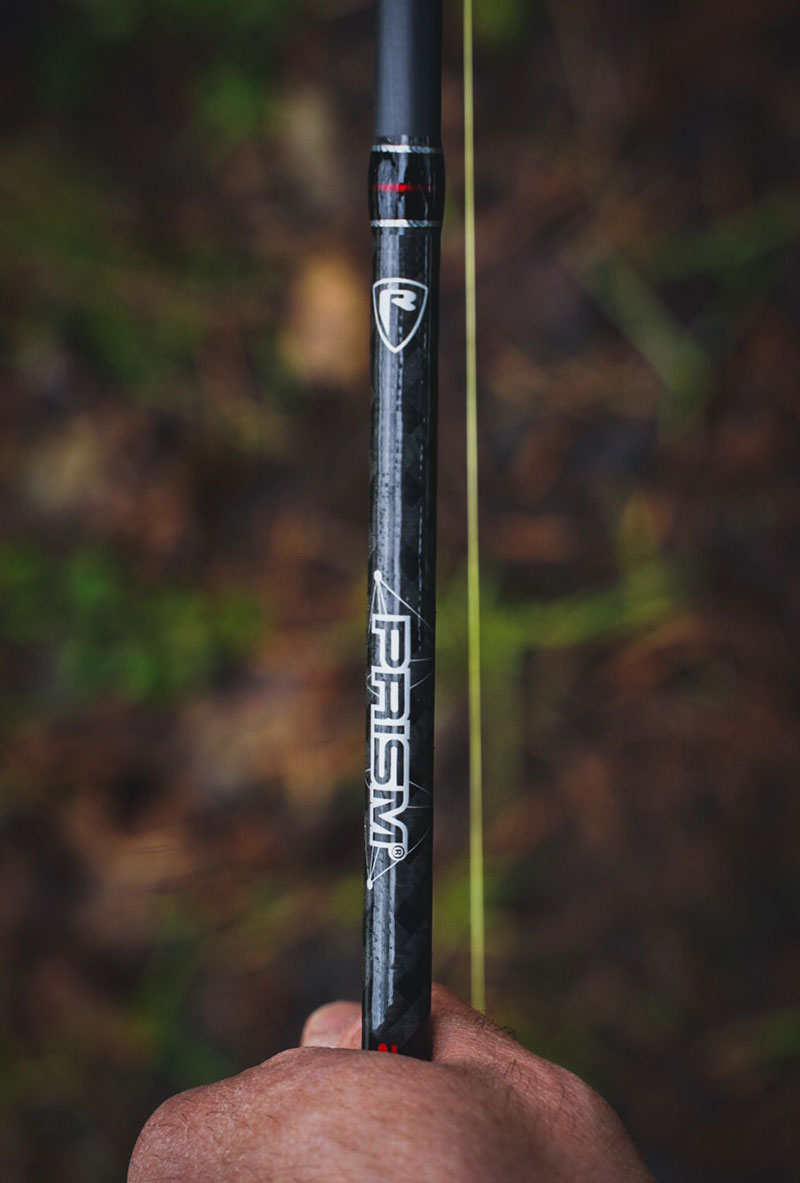 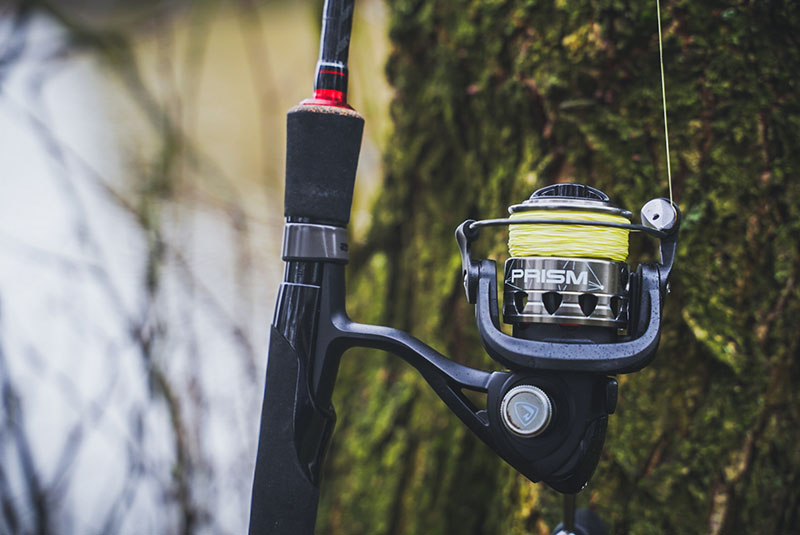 Crankbaits, hardbaits, plugs, whatever you choose to call them, are so easy to use. There’s no magic way to rig them. You either use a wire trace or fluoro leader depending on what you’re targeting and your venue, you tie your lure on and away you go. 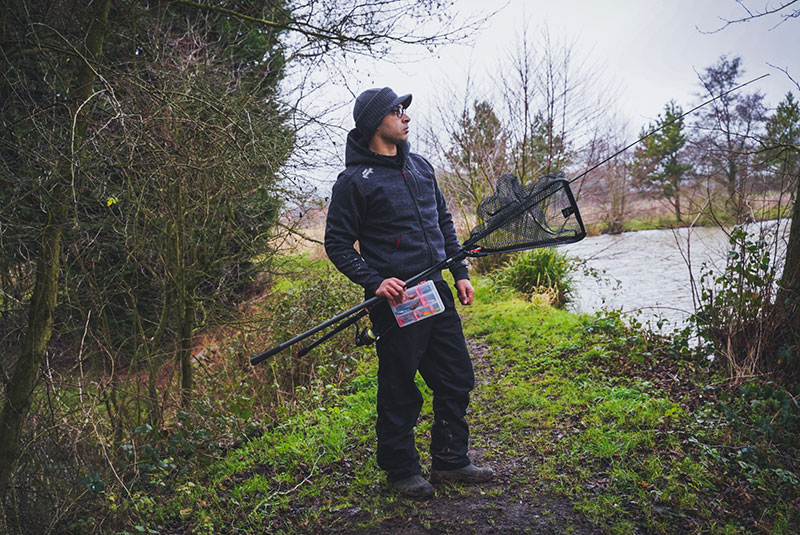 As we’ve seen today, location is a vital key to making your fishing trip successful. You can’t catch what’s not there, whatever your lure choice. Its then a case of mastering your chosen lure so you make the most of what the lure is capable of.

Vary your retrieve, vary your speed, vary your depth and change lures once you’ve exhausted one. Have fun exploring your commercial fishery, there’s some great sport to be had with the perch there.

Just as the camera was packed up and we were about to leave him, Samim is seen going back on his word and using a Salmo Hornet. “I couldn’t just leave without having a few casts with this legend,” he laughs. And sure enough he manages a couple more smaller fish with the Salmo Hornet Super Deep Runner 4cm in Gold Fluo Perch as the light fades.

The legend lives on. The lure, that is…