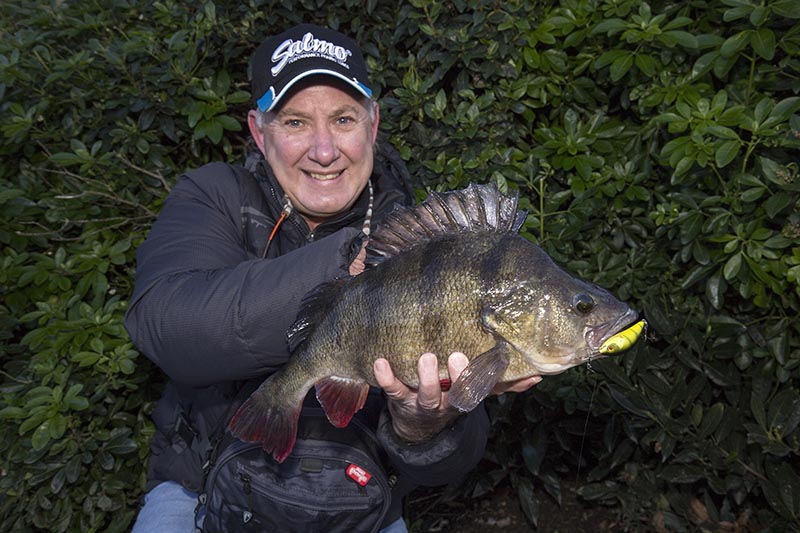 This Christmas and New Year had been like no other. It was January 2nd, and most of the east and south east of England were in a tier 4 lockdown, meaning Sam and I couldn’t venture outside of our district to fish. Luckily though, there are seven different rivers that flow through our district, and one of those is close enough that I can see it from my bedroom window!

Having grown up in the area, I know these rivers very well. I probably should do really as I’ve been fishing them for over 50 years! I prefer to fish further afield now, as they’re not quite like what they used to be, but sometimes, they can throw up a few surprises.

Sam and I had a section of river in mind to try, where, in the past, we’d caught some nice pike and perch. We set off a little later than planned, but to be honest, it was more about getting some fresh air than catching. It had been a hard frost the night before, so it was certainly fresh! The frost had also helped the river fine down from all the rain we’d had between Christmas and New Year, so the conditions had improved since checking the river the day before. Within 15 minutes we were walking along the bank to the area we’d planned to start at. I’d already clipped on my chosen lure the day before, which was a crankbait - a Salmo Rattlin’ Hornet 4.5cm in Hot Perch, which dives to around 6ft when cast. Sam started slightly downstream from me, alternating between creature baits and shads, either jigged or on a straight retrieve. 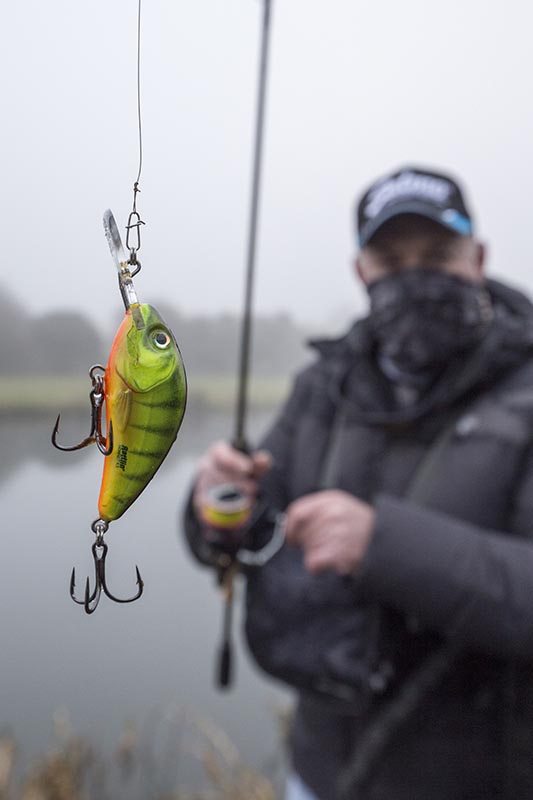 After around 20 minutes of fishing, Sam moved further downstream. This gave me an opportunity to move to where he’d been fishing and try a crankbait. If one of us is using a different type of lure to the other, one will move to where the other was fishing and cover the same area, as a change of tactic can often produce a bite. Casting 45 degrees across the river downstream to the far side, I swept the rod tip to my left, pulling the crankbait down towards the bottom. The fine diameter braid cuts through the water and helps the lure dive deeper.

I then started my retrieve. At this time of the year, I tend to slow down the speed of my retrieve as much as I can, but at the same time making sure I can feel the vibrations given off by the crankbait through the rod tip. 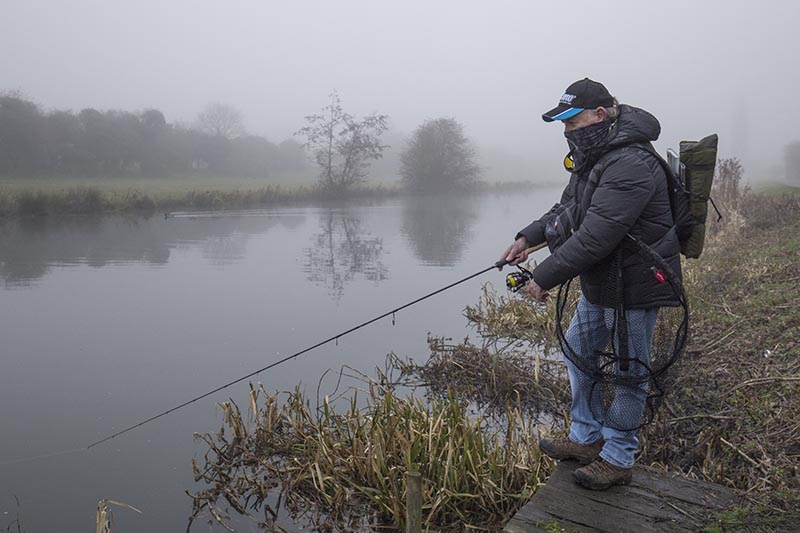 If you want to keep your crankbait close to the bottom, keep the rod tip down 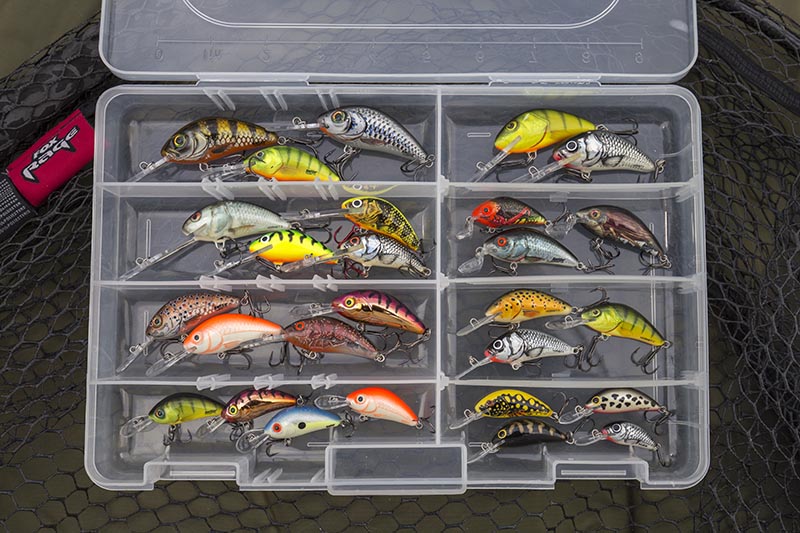 Shallow, medium and deep diving Hornets and Rattlin' Hornets, in a variety of colours 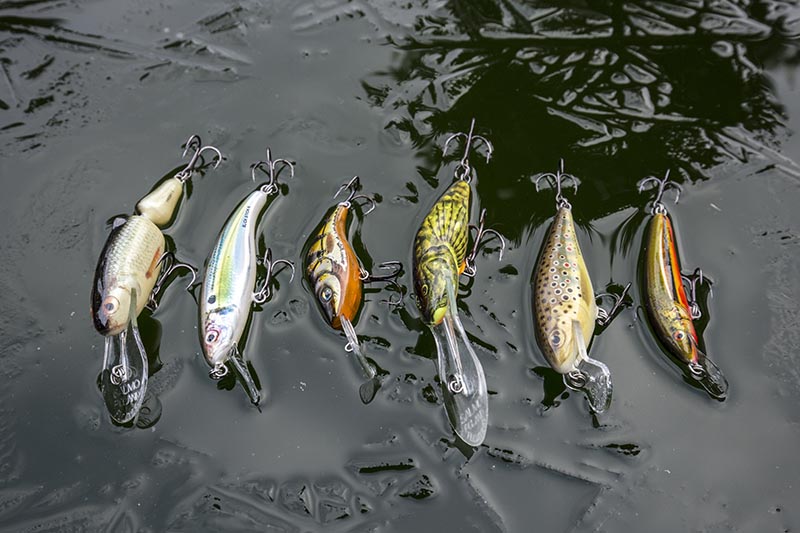 A selection of some of my other favourite crankbaits for perch

Although I do mix up my retrieves every now and then, in the wintertime, I mostly find just fishing a slow, steady retrieve is all that’s needed. After fishing my lure two thirds of the way across the river, the bottom started to shallow up and I felt the crankbait catch some weed, so I gave the rod tip a quick rip to shake the weed off, then continued my retrieve. A couple of turns of the handle later and my rod locked up - this time though, it wasn’t weed!

There was no need to strike - I just wound in to the fish, which is all that’s needed when fishing crank baits. It was a short fight, and in the bottom of the net I was staring at my first perch of the year, which weighed 2lb 12oz and measured 40cm. 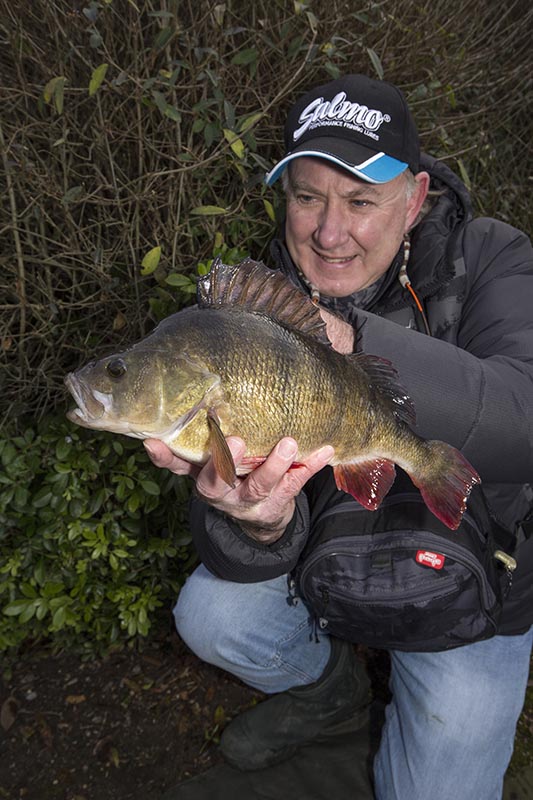 By now, it was around 1pm, and because of the pandemic, the footpath that runs along the bank was starting to get very busy with walkers and cyclists. It was becoming difficult trying to keep a two metre distance from them, as a lot of people just didn’t seem to care how close they got to others. Half an hour later, after dodging pedestrians and making casts, I had another solid take. I knew it was another perch because of the head shaking, but this one felt bigger than the last, and as I’d hooked it quite close to the bank, I didn’t mess about getting it in the net!

We both knew I’d caught a good perch, and our guess was that this was probably a high ‘3’. Whilst Sam held the fish in the net, I was preparing the camera and scales and laying out the unhooking mat. Unfortunately, we started to get a bit of a crowd gathering, which was making the situation quite stressful! In fact, before we’d even lifted the fish out of the water, a lady approached me and asked if I could take a picture of her holding my fish, on her phone! Neither of us could believe it, and obviously I was never going to let that happen due to the Covid restrictions and the safety of the fish!

After taking some photos, it was time to weigh the fish and take a measure. I was very happy to see the scales read 4lb 1oz, and it measured 46.5cm. After filming the fish swim safely back to its home, I picked up my rod and started fishing again! 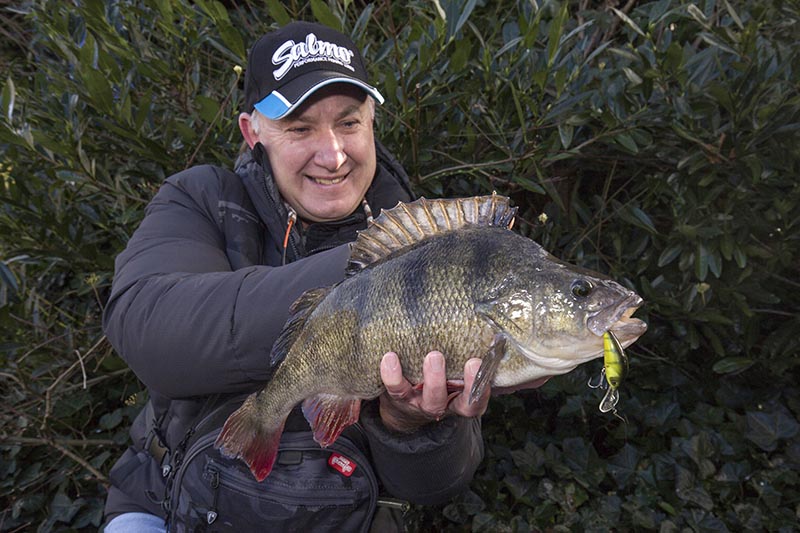 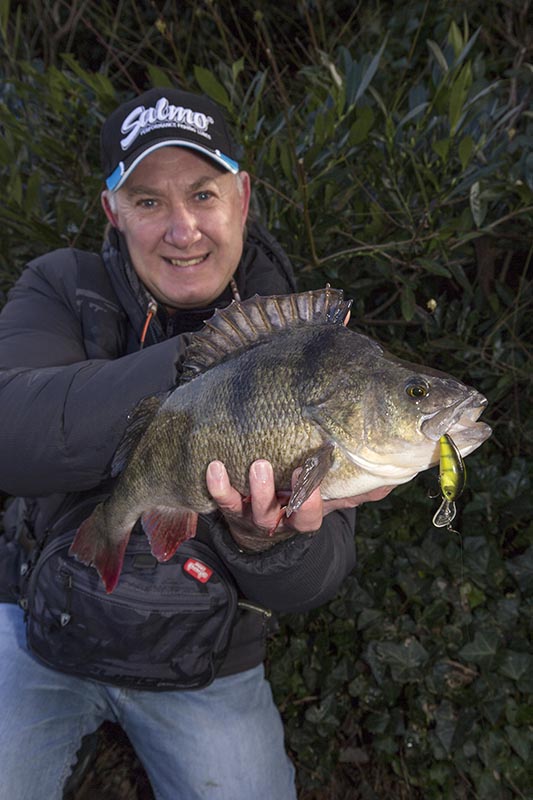 Another angle of the 4lb 1oz

I think it was on my third cast that I had another smashing take. To be honest, my adrenaline was still pumping after catching the last fish, but when I saw another good perch surface and slide in the net, I was getting the shakes! Again, we both guessed the fish would be a high ‘3’, but we again underestimated! This cracking looking stripey weighed 4lb 2oz, measuring 46cm - only half a centimetre shorter than the last fish, but deeper and chunkier. We were both a bit speechless, as although we’d been fishing the river for most of our lives, this was the first brace of 4lb+ perch one of us had managed in a session. Sam had come very close in the past with a brace of 4lb 1oz and 3lb 15oz, but this was something special. 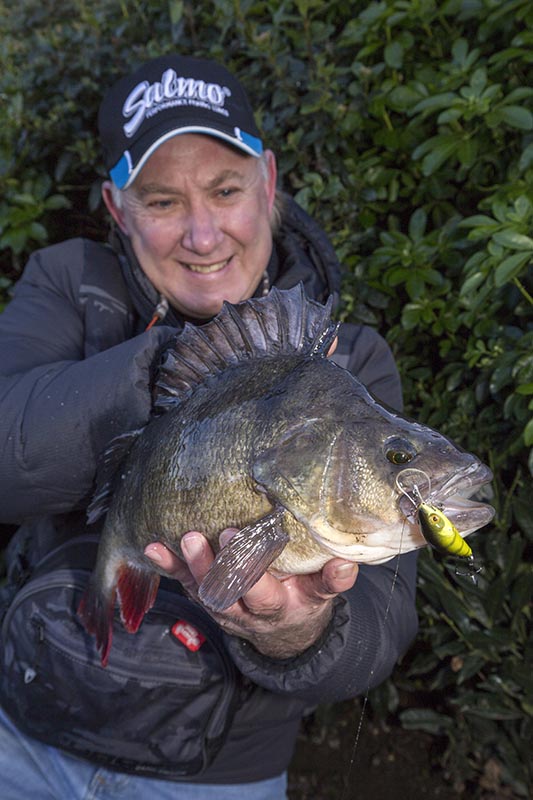 An immaculate chunk of a perch - my first brace of '4s' caught from a river!

As my crankbait had been working really well, I felt no need to change, and whilst Sam was putting away the camera, I cast out again. I cranked it down, trying to keep the lure as close to the bottom as possible. He hadn’t even finished putting away the camera when he looked round and saw me in to another fish, on my very first cast after releasing the last one! With all the ‘kerfuffle’ I’d left the net a few metres from where I was fishing, but thankfully, the fish stayed on and Sam grabbed the net and scooped it up quickly for me. 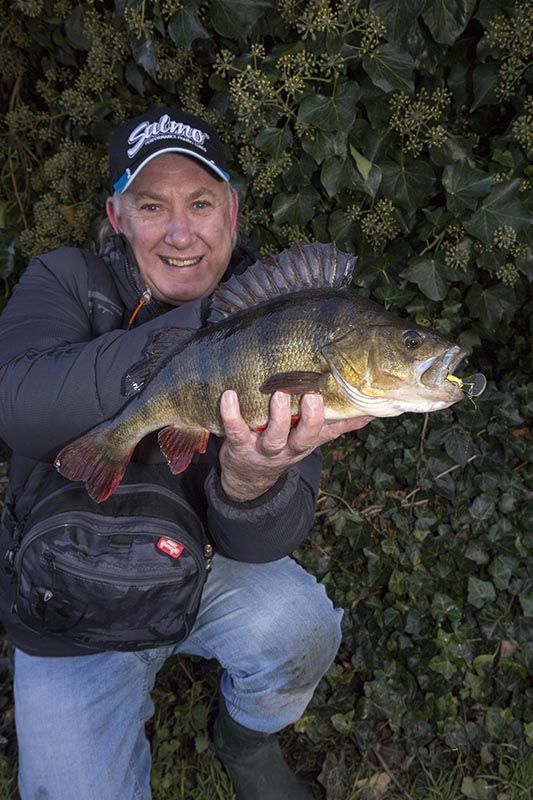 When they're taking the crankbaits like this, you know you're using the right lure!

What an action packed couple of hours I’d just had, and although I didn’t catch any more fish after this, to end the session with another nice perch weighing 3lb 3oz (44cm) was way more than I was expecting when I set off from home that morning! It was a trip that Sam and I will never forget!