It's a bitterly cold winter morning and the Sat Nav has just led us to the bottom end of an industrial estate to what looks like an abandoned shipyard. Not your typical scenic fishing location, but we are assured this stretch of the river Hull can produce some pretty amazing pike and perch on the right day.

We're here to meet Fox Rage/Salmo consultant Jason Stokes, and he's going to fish with some of his favorite Salmo lures, showing us which to choose, and how to work them to their maximum potential.

We've not given him an easy task given the conditions, but he's confident his lure choice will tempt a weary predator out of their hiding spots. 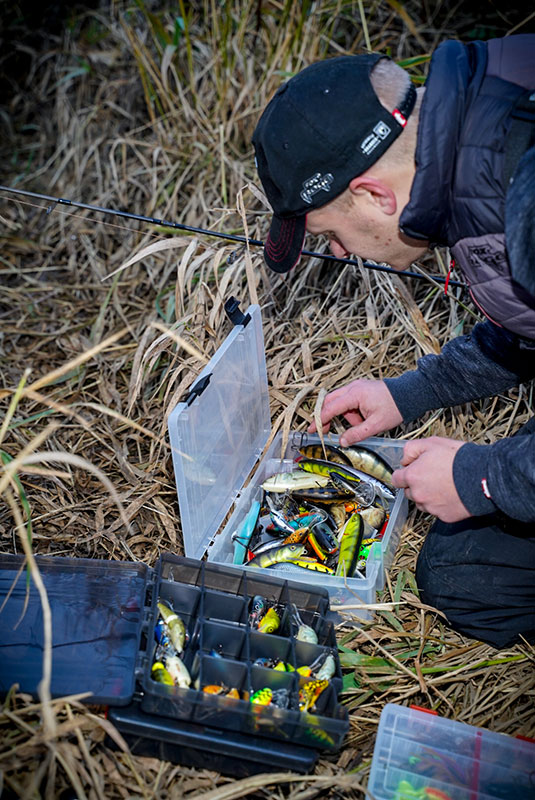 Jason has a range of Salmos to work today

On arrival, Jason surveys the section of the river to look for likely spots where predator fish could be lurking.

“This is a tidal stretch of the river, and right now the tide’s on its way out,” explains Jason. “This usually means the fish will head out to the deepest spot which is the centre of the river”. Knowing this gives you a good idea of where to start casting when the tide is on the move.

Armed with a Fox Rage Terminator Pro Swim & Soft Rod, Jason picks out one of his favourite lures, the Salmo Slider 16cm in Real Perch pattern. He begins casting towards nearby features likely to hold pike. “I’m going for obvious ambush points now as the tide is on its way out, and this lure is perfect for getting out there and sinking into the strike zones” Jason tells us. 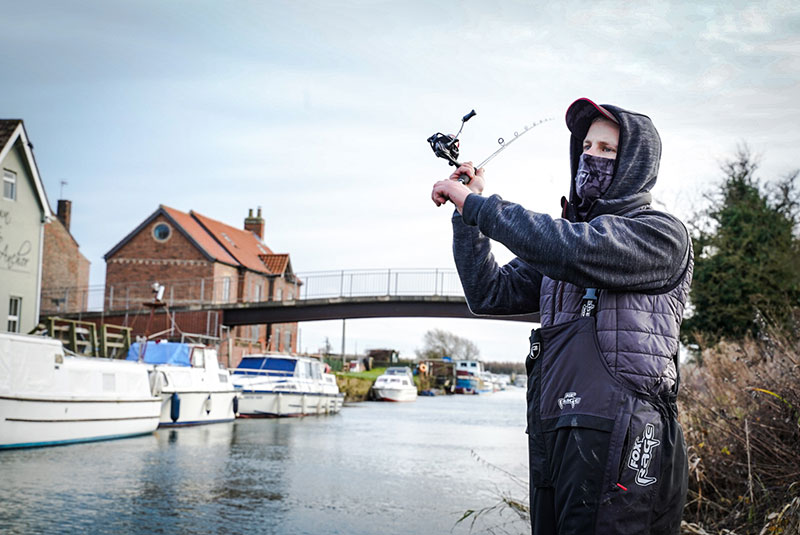 “The reason I like this lure is that it casts like a rocket, it can be worked like a jerk bait - as slow or as fast as you like, and it's shape is the perfect imitation of a skimmer. One of the pike’s favorite snack! The best thing about it is I often get hits as the lure’s sinking, or right after the first twitch”. The water visibility is surprisingly good considering the current conditions, which is why Jason is opting for a natural colour patterned Slider. 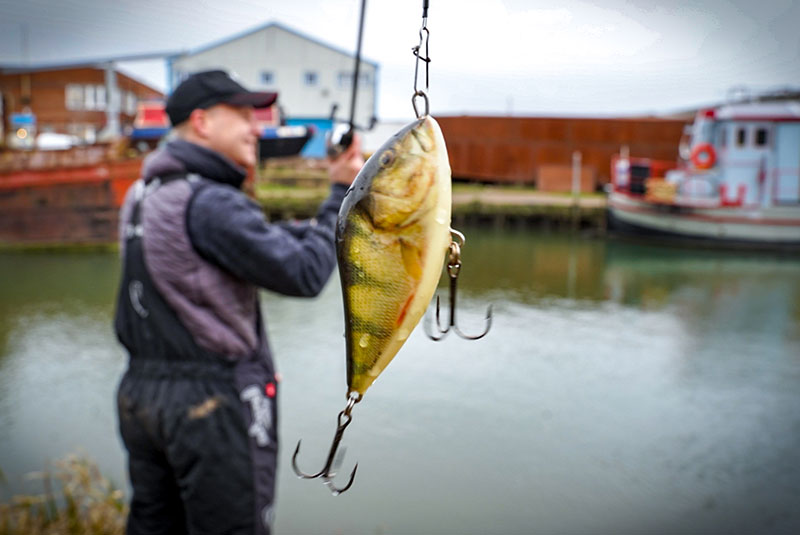 A natural coloured slider was Jason's first choice for the pike

Once the tide goes out, there’s a period of calm with the water appearing to be still. As if waiting and gathering its energy to once again turn back and fill the river. It’s during this calm period that we notice some fry jumping in front of a moored boat.

Jason switches to a lighter set up in the hope of tempting perch this time, as the pike seem to have moved on elsewhere. For this set up, he uses the Terminator Pro Twitch & Jig rod with a 1000 size Prism Reel - a perfectly balanced setup you could fish with all day long.

Jason’s lure of choice is the Salmo Executor Shallow Runner 7cm, in Real Perch pattern. “I’ve had a lot of success with this lure early on in the season,” says Jason. “I remember this lure being chased by an entire shoal of perch in the warmer months. When the fish are in the mood for a chase, this is a great option”. 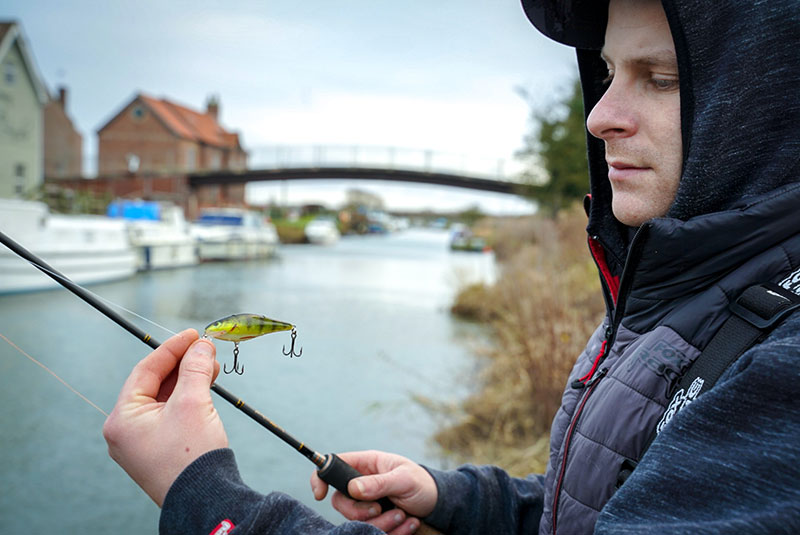 The Salmo Executor - a brilliant lure for perch

The Salmo Executor is such a versatile lure. It can be fished close to the surface to draw predators to the upper layers of the water. On a pulse style retrieve, its action mimics a fish in distress. Whereas on a steady crank, it can dive down to two meters with an enticing shake that’s irresistible to predatory species.

With his confidence high after seeing the scattering fry, he begins casting around the area. And it wasn’t long before there was a solid hit on the Salmo Executor. It was on! The first Perch and a beautiful specimen that really put a bend in the rod. 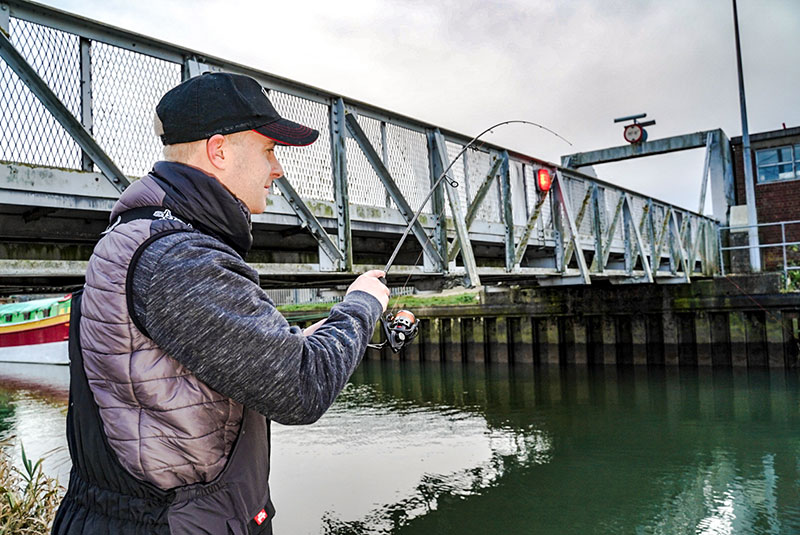 A great feeling when you get that slam! 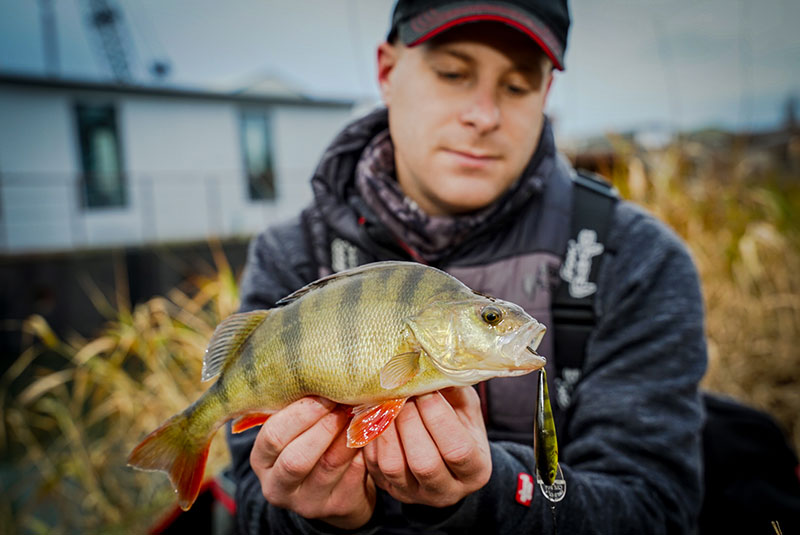 A great start on the Executor

The perch is unhooked and kept in the net to recover while Jason has a few more casts around the hot zone. It pays off with several small fish showing interest. “I always try to recast as quickly as I can,” Jason explains. “It really pays to put your lure back in front of them while they’re switched on to prey fish, and sometimes that’s just a very short feeding spell of a few minutes”. 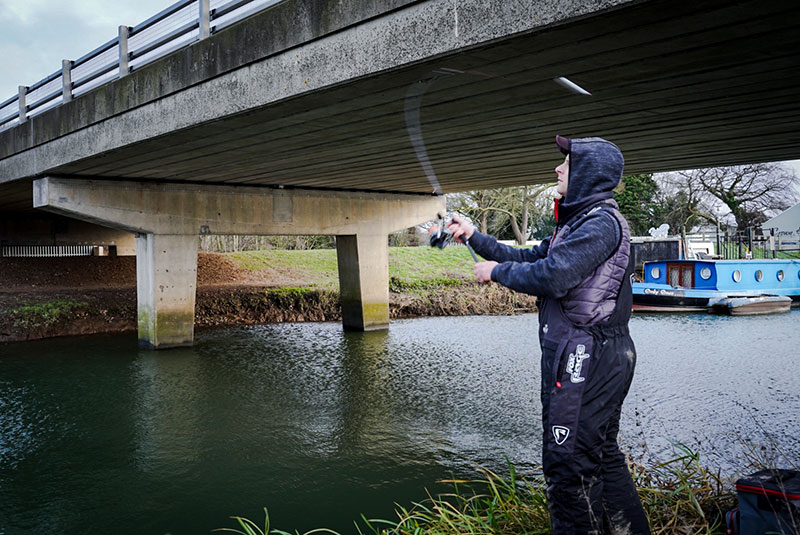 Always remember to cover the obvious features, as well as the not so obvious

Several hours pass, and after continuing to catch a lot small perch from several swims in the area, Jason switches back to pike fishing, persevering with the Salmo Slider. The wind picks up and there is a sudden drop of temperature. We come across an angler feeder fishing and he tells us that he hasn’t see signs of any pike in the area since he arrived at dawn, and pike haven’t tried to grab any of the silver fish he’s been catching. Not the news we want to hear, but information like this is good to point you in the right direction.

After hearing this information, Jason decides to change to brighter lures. “They’re not having the natural looking lure today, so we’ll try something brighter to try and trigger an attack out of aggression,” he explains. “The pike may have already fed, so we’ll just try to make them curious”. With this in mind, Jason swaps the Salmo Slider for a Salmo Square Bill in Demon Craw colour. 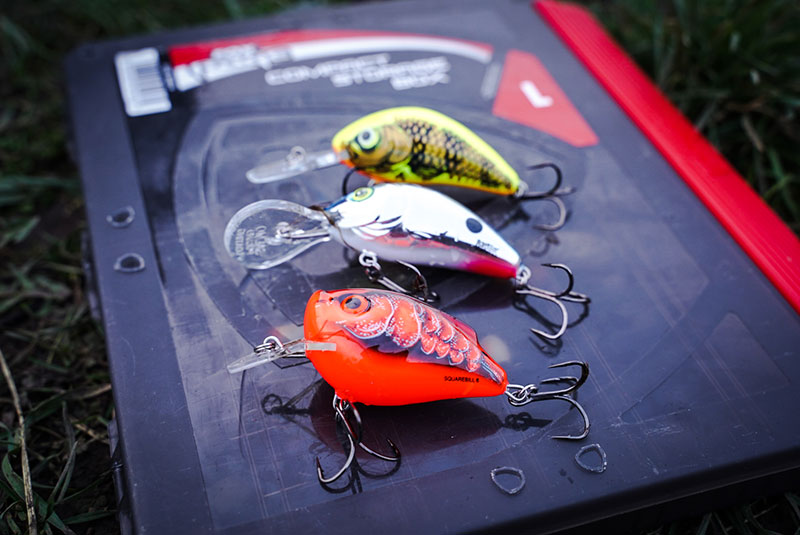 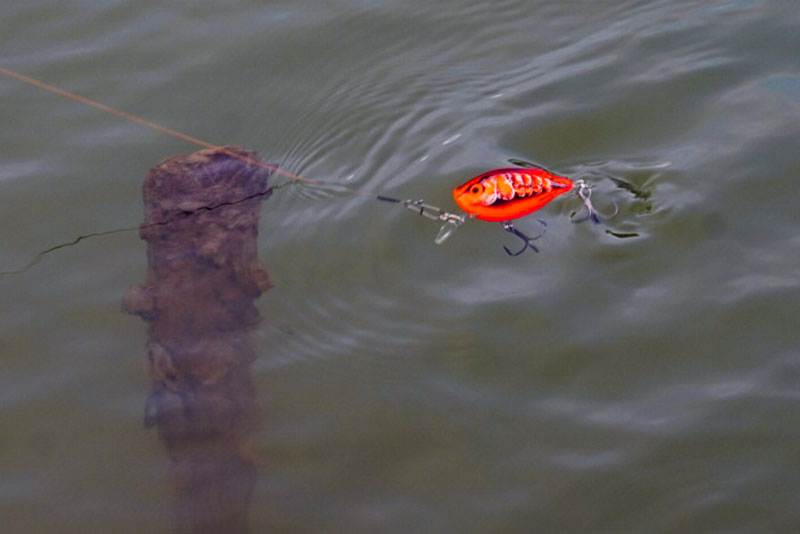 Now that Squarebill shows up in the water!

At just 6cm, this lure isn’t big, but it’s certainly clever. The “square” in its name comes from the square shaped lip which acts as a deflector and prevents it from getting hung up on snags, which is an advantage today as this is a very snaggy river and we’ve already said goodbye to several lures. Working the lure in the shallows to demonstrate, you can see it bouncing off rocks and branches, but magically not getting snagged.

Within a few casts, Jason gets a follow from a pike. His theory worked. They’re not actively feeding, but the change of lure is triggering their curiosity. Although will it be enough to get a strike?

Several more hours pass by with no follows, and no signs of pike on the river. The wind turns icy cold and the light begins to fade. This could now be make or break.

Jason switches to another little Salmo lure with a big reputation. A Floating Rattlin’ Hornet 6.5cm in Gold Fluro Perch colour. This little hard bait makes a lot of noise, and its colour makes the perfect flash in the fading light. 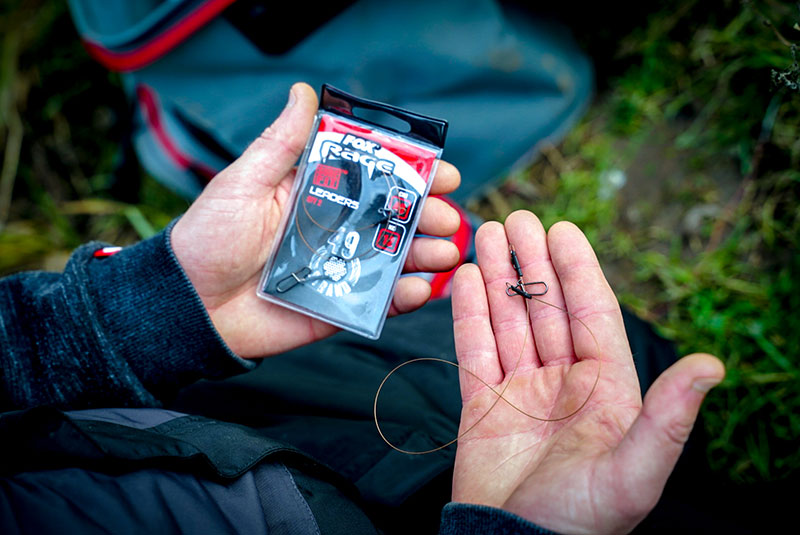 Always use a wire trace when targeting pike. The Rage 49 Strand is very flexible and kink resistant

On a straight retrieve under a bridge, Jason manages to get another weary pike to follow the lure, but sadly the fish turns at the last minute and swims off into the depths. They were definitely curious, but not up to striking.

Jason continues to fish into the fading light, and we return to the first swim which produced the biggest perch of the day, hoping that the pike have now moved in at high tide. 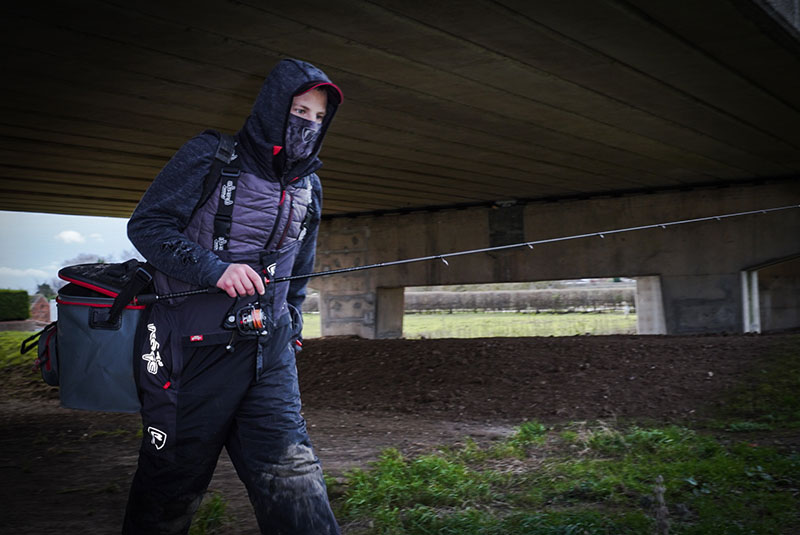 Sadly, it wasn’t meant to be for the pike, but a valuable lesson was demonstrated. Crankbaits can work in a river in the middle of winter and on the toughest of days. Plenty of perch were caught and a couple of weary pike were tempted even though they weren’t switched on.

“There’s a lot of fun to be had with the Salmo lures we used today,” Jason tells us. “Rigging them couldn’t be any simpler, but picking the right lures and working them effectively is something you can experiment with and see what works best on your venue”.

You can’t force a fish to bite, but armed with the right lures and techniques, you can certainly tempt them.

Don’t forget to tag us in your catches so we can see what you’ve caught with your Salmo lures.